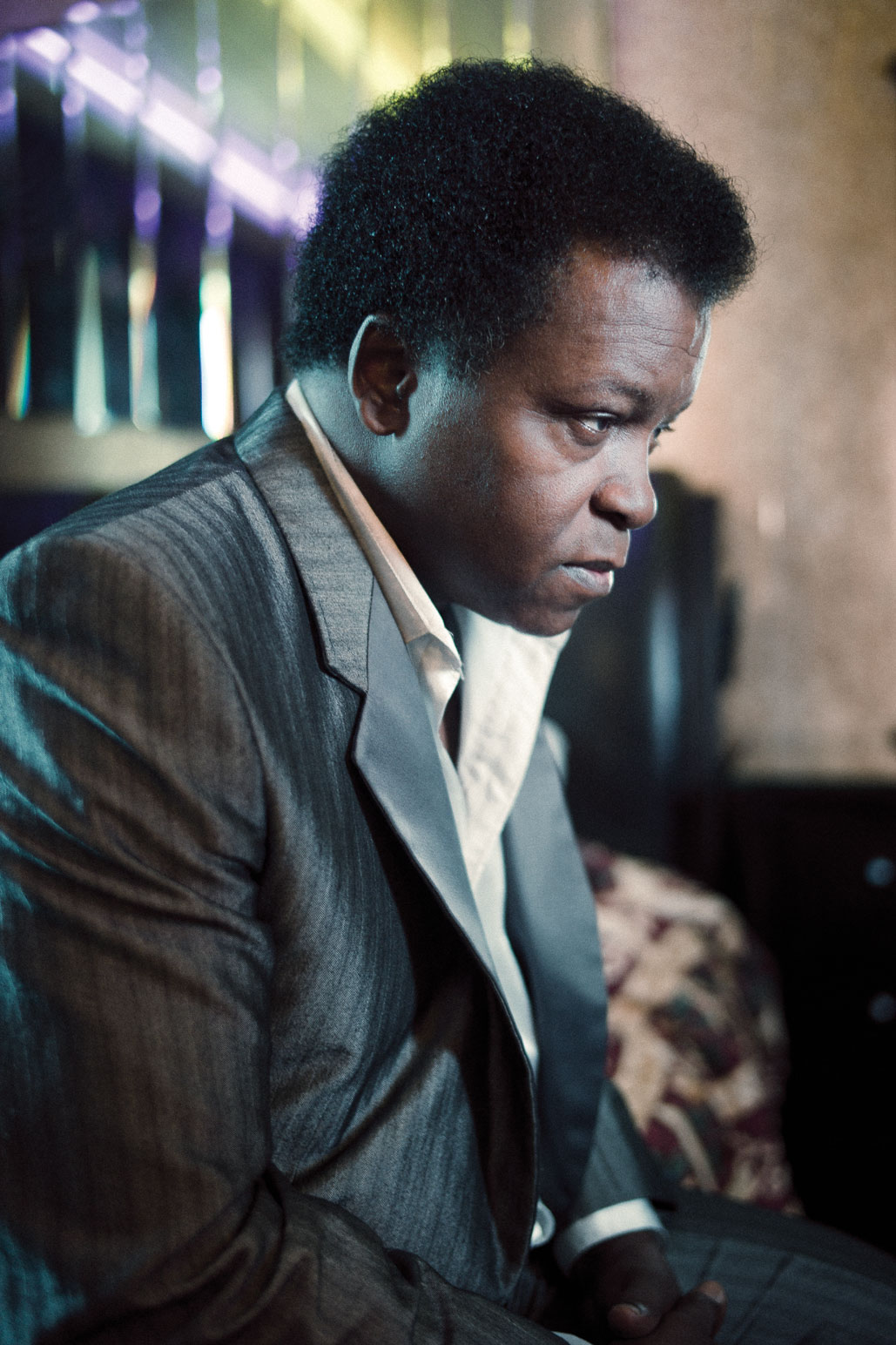 Back in 2012 we talked to Lee Fields about his long and variable career leading up to the release of his then new album, Faithful Man. The article chronicled his ups and downs, changes of label and struggles to make it through.
We hereby restore it to the public domain as an online companion piece to the new feature on Lee in our May 2014 print issue, which focuses on the period leading up to his great new set, Emma Jean.

Lee Fields is waiting for me in the foyer of the Jury’s Inn, Islington. It’s the morning after his show at the local Assembly Hall, the tour bus stands outside waiting to whisk him and The Expressions [some of whom are milling about in reception] off to Leeds for another gig, and Lee is feeling just a little hoarse. The itinerary has been somewhat full-on, taking in dates across Europe as well as the UK, and this is definitely a man who believes in putting his all into his work. You think he’s going to keep it short? Not a chance, brother.
Instead, he admits it feels nice to be in demand after all those years as one of soul’s more obscure cult artists. Totalling it up, Fields has probably cut or been featured on around a dozen or so albums in the 43 years of career he has tucked under his belt so far, although it’s fair to say that not many, even on on the soul scene, would claim to know his output all that well. In fact, most of those who now call themselves ardent Lee Fields fans would probably vouchsafe to having discovered him either in the past three or four years on the basis of his last two projects for Truth & Soul Records [2009’s My World and the newly released Faithful Man] or perhaps as a result of his flurry of albums around the tail-end of the nineties/beginning of the new century [for Pure, Desco and Soulfire Records]. Lee Fields, you see, has been hard as hell to track down.
“I sure bounced in and out of a lot of things,” he laughs. “I signed with a lot of labels. I signed with London. I signed with Ace. I dropped out completely for a while in the eighties – when it went totally electronic, it wasn’t for me. That’s when I did some real estate, kept the family fed. But then I met Gabriel Roth and recorded with Desco Records. Desco turned into Soulfire, Gabe and his partner Phillipe Lehman broke up… and then I was with Daptone… and now it’s Truth & Soul.”
Simple.

Methinks we need to go back to the beginning and do this properly. Lee Fields was born in Wilson, North Carolina in 1950, one of four children. Money wasn’t exactly cascading out of every cupboard at the time – his father used to build roads in the summer and get whatever temporary work he could come winter – so when young Lee could earn a little extra from his James Brown impressions and got to open for visiting acts like The Platters, Percy Sledge, O.V. Wright and Solomon Burke, his mum wasn’t going to stop him from hanging out in those kinda clubs. At age 17, however, he decided to cut loose for New York City.
“I met this guy, Fred Williams, who told me I should go up to New York and that he’d see I didn’t have to worry. I was naïve. My mother gave me the money for the bus ticket and $20. I must have been out of my mind. I got a taxi to Brooklyn – should have got a train and saved a little. And when I got there, where the guy lived, he was just moving out of his apartment. Turned out he was actually getting married next day and moving on! Thankfully, he persuaded the landlady to let me take the apartment, so I had somewhere to stay. She charged me $25 a week. Now I had $2 left!
“But I also had this friend, Ronnie, who persuaded me to go with him to some club – the 521 Club, I think – and he asked some guys if I could sing for them. I told ‘em the key and picked out this James Bown song, and when they played it I sang along and danced. All of a sudden people started throwing money at me. Suddenly I had a hundred dollars! Well, $102, including my other $2. So I paid the rent for three weeks in advance and kept the $27 for myself. That was good money too, back then in the sixties.”

It was the beginning of a ride on the soulacoaster that would have many a rise and fall over the next 30 years. Soon Lee had himself some more club gigs, earned some more money and cut himself a debut single, Keep Looking. It wasn’t a massive success, but it did bring him a couple of years’ worth of work back down south: he’d fly back down to Carolina and gig off it until 1969, when Kool & The Gang’s manager Gene Redd and local promoter Teddy Power lined him up for a stint as Kool’s new lead singer and a potential deal with Delite Records. Trouble was, just as they’d set the likes of Patrick Adams onto writing some material, Kool’s single Kool & The Gang took off, followed almost immediately by Kool’s Back Again… and so Kool and his Gang had no need of a new singer at all.
Lee got married, continued his own gigs around the south and by 1973 recorded Let’s Talk It Over for Norfolk Sound. It was later picked up by London Records.
“It was a big record in the south for me,” reflects Lee. “It kept me working until the late seventies. By then I figured I needed an album, so I took Let’s Talk It Over and I put it with some other songs I could get together… and for some reason that album has become areal collectors’ item nowadays.”

By his own admission, Fields took a long break from the music business during the eighties. While he’d survived the major label inclination to sign self-contained bands during the seventies, he had little interest in playing the machine-driven pop-soul game of the eighties and decided to try and make his fortune in real estate and look after his growing family that way. He did OK too, supporting three children of his own as well as a nephew whom he and his wife took in after the boy’s dad had killed both his wife and himself.
By the end of the eighties he was getting that itch for music again.
“I remember I said to my wife, ‘Let’s buy this place, put a fish restaurant on the bottom floor and rent out the apartments above it’. She turned to me and said, ‘Baby, what do you know about cooking fish? Music is your thing – you should stick with what you really feel, what you know’.
“So in 1990 I went out and bought about $20,000 worth of equipment, including a computer and D.A.T. machines and put ‘em in my basement studio… although I had no idea at all about how to work them! Eventually I got this guy to come in and show me how, and I realised I could play just about all the music myself. And so that’s what I did: I recorded my tunes and went back to doing shows to the D.A.T. machine instead of a band, and began to draw a crowd again.”
Soon Lee was back working the circuit around New York, Jersey and Newark, graduating from giving away his tapes after gigs to selling them and then getting the music cut onto CDs and slipped onto local jukeboxes. By the time he’d notched up sales of about 10,000, Ace Records’ Johnny Vincent approached him to sign for the label. The ’92 album Enough Is Enough was the result.
Fields next batch of releases are not really what his current popularity is based on, however. As he describes above, at this point he was cutting music that sat mostly on top of synthetic tracks, so albums like his mid-nineties Ace sets Coming To Tear The Roof Down and Dreaming Big Time reminded his troupe of supporters that he was still active, but didn’t really stir new interest.

The big upturn came when he ran into the Desco Records boys. Roth and Lehman were fanatics for raw, band played funk, soul and R&B and had been following Fields’ adventures over the years. His voice was perfect for what they had in mind: a project that sat close to what Godfather James Brown used to do all those years ago – and no compromises to modernity. First they co-opted him into The Soul Providers as lead singer, releasing an album, Soul Tequila, in ’96 on French outlet Pure. [It was during these sessions that they also discovered Sharon Jones as a background vocalist.] Roth and Lehman then created the Desco label, using The Soul Providers as house band and cut Lee on the 1998 solo set, Let’s Get A Groove On, the one that really sparked interest amongst the modern day old-school funk crowd. When Roth and Lehman subsequently fell out and went their separate ways, they both set up labels and Fields, an independent artist, was able to cut material for both: Give Me A Chance came out on Roth’s Daptone in 2001; Problems came out on Lehman’s Soulfire in 2002. These days Lee is signed to Truth & Soul, a label owned by former Dap-King saxophonist Leon Michels. He’s clearly happy to be making the finest music of his career.
“Yes, I believe I am,” he agrees. “I have often wondered why this thing happened for others and not me over the years, but it has never really bothered me too much. I was always able to make money out of my music. I have never been in this for the fame aspect – I’ve done it because I loved making music. But it did sometimes puzzle me as to why people around me took off and I never did.
“But people have always come looking for me. I haven’t gone in search of a record deal since 1974 – I decided to give it up back then – and instead every deal I’ve had has come as a result of someone contacting me first.
“So here I am: I go out every night and give it all I got, and I know this is what I’m supposed to do. I wouldn’t change a thing.”