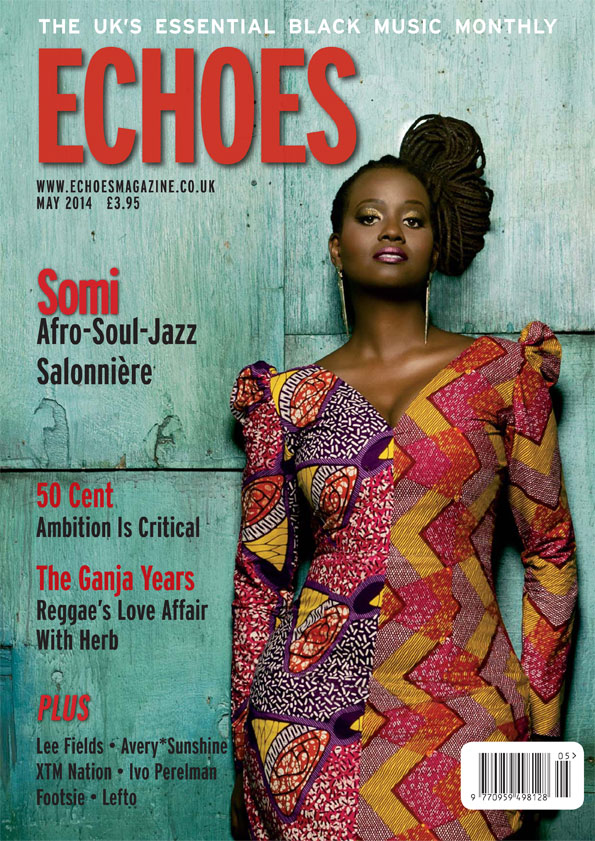 The May issue of Echoes stars American-African jazz-soul artist Somi on its cover, to tie in with the release of the artist’s superb new album on Sony/Okeh Records, The Lagos Music Salon. Inside you’ll find the customary two-page feature, written by Editor, Chris Wells.
But because, from over an hour’s conversation, several topics inevitably arose that in the end didn’t figure in the printed article, we offer here, as an online exclusive, some more of Somi’s comments on several of the tracks from the album.

On the song Ginger Me Slowly, a song on the romantic inclinations of Nigerian men:
“To ‘ginger’ someone was the first bit of slang I heard when I was there. Actually, it’s a very British thing to say ‘ginger’. It speaks to the spice itself – sweet, but it bites back. It makes people feel good. When you ‘ginger’ someone, you provoke their interest, make things happen.
“And Nigerian men can be… bold sometimes with their assertion of interest. They say, ‘Let’s go to London… shopping!’ And I’m like, ‘But I just met you’.
“Now, I like that they are so bold… and it’s deep in their culture. Nigerian men really celebrate their women; they take a lot of pride in taking care of their women. And sometimes it can be a little intense. On the other hand, sometimes you really want them to step it up! So the song addresses both sides of that. There’s something beautiful about someone gingering you.”

On the track Shine Eye Somi apologises for what she terms her ‘Western sleights’.
“… And I talked about not knowing how to ‘fix it’, yes? Well, [relocating to Lagos] I wanted to go somewhere that had enough African-ness to make me feel at home but enough foreign-ness to make it feel fresh. Let me say, I was regularly reminded that I was not Nigerian! Of course, there are a lot of Nigerians there too who have that dual identity thing as well. But if you’re gonna focus on how you don’t have what you have in the US, you’re not really gonna be present over there.
“So, these moments would happen where it was more about the Nigerian versus my Western side. If I’m in Uganda or Rwanda, where I have family around me, they can point it out if I’m acting like a foreigner. I’m aware of it. But in Nigeria, because I was still figuring out the Nigerian nuance, sometimes I didn’t understand.
“There were times… well, I was so used to doing business in a New York kind of way, and it would become frustrating not to move on as fast you’d think. I don’t think it was necessarily about me being a woman, either. People I knew were open-minded in that way. There are chauvinists – there are everywhere – but I was excused a great deal because I was a foreigner.
“Most Nigerians know I’m not Nigerian right away. I blamed my western perspective sometimes if I hurt someone’s feelings. But I do feel I understand more about being a Lagosian now. It’s rich and textured and complex.”

On the song 419 Somi makes reference to corruption in Nigeria – the number 419 being the article in the Nigerian Criminal Code for fraud. She noticed how locals used the code in slang:
“I’m not interested in perpetuating negative stereotypes about Nigeria, but I did want it to be honest at the same time. Over there ‘419’ is used as slang. You’d be out with your girls and meet a guy and one of them might say, ‘He’s a bit 419’. It means he’s a bit shady. So the song says, ‘Let’s be who we are and not kid ourselves’.
“The person who does the voice at the beginning? She’s a friend of mine, a TV producer in Nigeria now. She’s hilarious. Nigerians don’t wanna talk about the corruption in the public sphere, but to make it into a joke is good.”