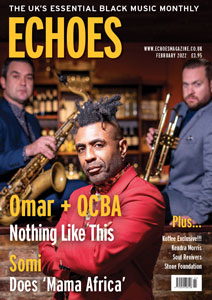 A sneaky peek of just some of what is in the February 2022 issue – OUT NOW!

London’s Barbican centre is unusually busy for a Monday afternoon. Yet the human traffic is distinctive: students with mortar boards and gowns are trailed by parents with cameras and smiles – overflowing, one presumes, from the Guildhall School Of Music And Drama, which is right next door. Omar knows the institution all too well.
“I studied jazz here, funnily enough,” says the singer, his familiar spiked locks ever so slightly flecked with silver. He has deserved icon status in soul, but he’s well aware of a kinship with other genres.
“Jazz and soul coming together… it’s not such a big stretch and we’ve been doing it for a long time; it’s second nature for us.”

On November 9, 2008, Miriam Makeba – known across the world as ‘Mama Africa’ after effectively representing the musical voice of said continent for many decades – wound up her performance at Castel Volturno, just north of Naples on Italy’s south-west coast, with a rousing version of her international hit Pata Pata. It would be her final act: as she left the stage, Makeba suffered a heart attack and died. She was 76.
When Somi heard the news, she herself was just about to go onstage in New York City: producer Brian Bacchus had called her minutes before she’d left her dressing room. As an admirer of long-standing as well as a proud woman of African heritage herself – she is of Rwandan and Ugandan descent – Somi felt the loss of an iconic and influential figure from her life. So right then and there she decided to do something about it.

Koffee, reggae music’s only female Grammy winner as well as the youngest ever, is now signed to Sony and breezed into London during December just past for an album listening party at her record label’s Kensington headquarters. It was bitterly cold outside and news of a worrying new Omicrom variant meant that Covid restrictions were very much in force – not that you’d have noticed once inside the building and the rum punch started to flow.
Radio 1Xtra’s Seani B was our host for the evening and he and Koffee quickly struck up a friendly repartee in-between playing tracks from her forthcoming album, Gifted. Since this debut set only has 10 songs on it, the session lasted barely an hour, but the diminutive 22-year-old seemed remarkably at ease addressing a roomful of London media folk and had plenty to say for herself.

Snow is falling in New York City as Kendra Morris joins our Zoom meeting to discuss her new album, Nine Lives. Up to two feet is forecast and in a couple of hours she’ll have to trudge through it to pick up her daughter from school. In the balmy late afternoon of South East London, I decide the least I can do is get on with it.
Ms. Morris – a multi-discipline creator in that she’s also an artist and film maker – has an attractive air of the maverick about her. Since her first album, Banshee, released in 2012 for Wax Poetics, she’s released new music intermittently: a covers album, Mockingbird, followed in 2013, but her last album, the self-released [and rather good] Babble, didn’t really trouble the chart compilers, something which, understandably, she found disappointing. Why, then, is February 2022 the right time to release Nine Lives? Had the various lockdowns somehow served to encourage her musical productivity, as it has with some?
“Actually, I really started a long time ago on this,” she explains.