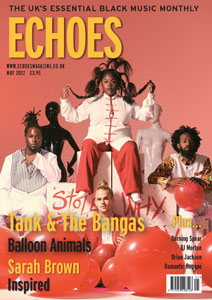 Care to pin some jelly to a wall? Then tell me exactly what it is that Tank & The Bangas sound like.
We know they can be soulful. We also know they go pop. They’re sometimes quirky R&B too. They rap. They do spoken word. They’re funky. They’re fun. They’re satirical, cinematic and sometimes as serious as death. And they’ve always have had star quality out front: Tarriona ‘Tank’ Ball can sing it any way you want or switch into theatrical poetry in a heartbeat.
But you never know what they’ll do next. Except, of course, be themselves.
And so it continues on the quartet’s new album, Red Balloon. Their third studio set [and second for Verve Forecast], it’s available to all from May 13 and follows 2019’s Green Balloon and last year’s EP Friend Goals as further evidence of a band finding its own style against a sea of soundalikes and a tidal wave of toe-the-liners…

The temptation to take music for granted in the age of Spotify is huge. Songs are streamed to infinity and jingles ping around every piece of new technology that arrives day after day. Yet listening to Sarah Brown talk about the first time she heard gospel legend Mahalia Jackson is a reminder of the life-changing effect that a singer can have on a youthful listener, especially if they are bearing a mighty heavy load.
“It was a release for me because I was a frightened child. I had nothing but fear,” says Brown. “In going to church, because I was allowed to go to church, I would escape through the singing and the instruments. Emotionally, on my way back home I would feel fine, absolutely fine, brave, happy and joyful… until I got through the door, then it would leave me. But I found my voice and found myself singing along with Mahalia.”

Burning Spear retired from the music industry several years ago – not because he’d run out of things to say or wasn’t in demand anymore, but because it was something that he’d planned and worked for – just like so many other professional people in various walks of life. His reasons for returning and embarking on a lengthy tour that’s going to stretch to several continents by the time he’s finished aren’t driven by financial considerations alone, but because he’s always viewed making and performing music as a vocation.
“When I was first doing music, it was fun. Then it seem like there was something else happening,” he says over the phone from New York. “The universe was calling me saying that I needed to be doing this… ”

“Just wait ‘til the morning, I know it’s been so dark for you,” goes the sanguine first line of the title song to PJ Morton’s brand-new studio album, Watch The Sun. It’s his 13th album as an artist overall and seventh released via his own label, Morton Records. Sporting a look – tracksuit tops and beanie hats – that resembles a bearded, socially conscious Marvin Gaye from the early ‘70s and creating a soul sound that has clearly studied the Moog-bewitched golden era of Stevie Wonder, PJ’s artistic direction as a soloist  away, that is, from pop band Maroon 5, for whom he plays keys – has been celebrated by both a growing fanbase and his peers, earning him Grammy awards at each of the last four ceremonies.
From the outside, judging by the improved chart placings and many accolades [not to mention his PR-handled Instagram page], you would be forgiven for assuming that PJ, personally, hasn’t really had to worry ‘bout a thing. Success though, doesn’t always beget happiness.
“I’ve been nominated [for a Grammy] sixteen times, so that means I lost a bunch… ”