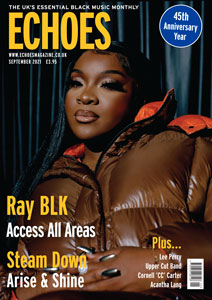 A sneaky peek of just some of what is in the September 2021 issue – OUT NOW!

For a number of reasons video calls have never really been my bag. For many of us, though, they’ve become a proper ‘thing’ over the past year:  Zoom quizzes, work calls, consultations, birthday celebrations… any excuse will do. On this occasion, however, I’m quite glad to take the second ‘incoming’ of the day: sitting on her living room sofa in front of an arresting canvas, Ray BLK looks right back at me, her warm, curious, striking features, completely free of any pretension. Over the next 45 minutes or so, I’ll come to see that this resting facial expression is very much matched by her personality.
As artists throughout the industry have been forced to adjust to the reality of no income from live shows, others, like Ray BLK, have simply ramped up their productivity. Aside from recording new material, she’s recently taken on the role of selector and agony aunt on her Apple Agenda show. Then there’s her YouTube vlog, Unapologetically Black – started to let her fans get to know her as a person: “Lots of people who meet me say they’re surprised by me being friendly!” she says, engagingly.
Moreover, she’s about to emerge from lockdown with a shiny debut album, a body of work that she began back in 2019 and finally put the finishing touches over the summer. It’s the culmination of a process that’s already seen her release three widely appreciated EPs and somehow the timing feels perfect. Still, busy as she’s managed to be, she admits to struggling at times with the new world we live in.

“Lockdown itself was a very strange time for me as an artist. I definitely lost myself a little bit, because I wasn’t doing what I like to do.

Whether ‘the great reopening’ is for good or not remains to be seen. Yet gigs are beginning to happen and the sense of release for fans and artists is intense, as if a saintly family member is coming home after more than 40 days and 40 nights’ absence. This summer Steam Down have had the pleasure of getting out and about for the first time in many months, bringing a big smile to the faces of the 10-strong south London collective, as saxophonist-leader Ahnansé explains, radiating properly good energy via an early afternoon zoom call.
“We just came off a weekend of touring. We did the Green Man Festival yesterday, got a nice little bit of sunshine,” he says, head bobbing on the screen. “And we did We Out Here the day before. It’s really nice to be back out touring and playing, just seeing the joy it gives people – and us at the same time – is a beautiful thing.”
The bulk of artists deprived of the sight of a real, rather than virtual, audience would surely agree, but the return to the stage is particularly welcome for Steam Down, first and foremost because their rise to prominence has been built very much from the ground up. When they started a weekly residency at the Buster Mantis bar in Deptford, south London in 2017, they were pulling in modest numbers of about 30. They stayed the course and within six months it was “pretty much full every time.”

There was a time when the weekly newspaper version of Echoesregularly carried announcements for reggae events at Reading’s Central Club. That was in the days before the iconic Black History mural was painted along the entire length of the building in London Street, which has now been standing derelict for at least 15 years. As developers now prepare to step in, there’s been heated debate over whether the mural should be the subject of a conservation order, but the Central Club’s legacy lives on in other ways, thanks to some of the musicians who played there.
Take the Upper Cut Band for example, whose debut album Painting On Silence is currently making waves thanks to a selection of original songs and rhythms that serves to reaffirm faith in quality roots music played from the heart, and that can comfortably stand alongside classics from the past.
“Reading was a big place for reggae back then,” notes drummer Bob Pearce who, together with bassist Ross Erlam, has been with the group since its inception. “Reggae was playing everywhere, and a lot of artists passed through the Central Club. Jah Shaka was a regular visitor and I remember seeing Israel Vibration backed by the Roots Radics there once, but then it started to fade after Margaret Thatcher declared war on reggae music, which was a thriving cottage industry at the time.

Tales of how the COVID pandemic has affected musicians’ lives over the past 18 months will have become familiar to regular readers of these pages. An absence of live shows has, of course, hit artist incomes the world over, while many recent albums have been recorded remotely out of necessity rather than choice, people used to coming together in one studio now commonly sending each other parts of songs and performances over the internet – then relying on someone down the line to pull it all together and make it sound like a joint creative effort.
San Franciscan soulman Cornell CC Carter has endured all of the aforementioned, just like many of his musical friends and acquaintances; but he also experienced an additional difficulty when he found himself on the verge of being trapped in England as the country entered its first strict period of lockdown back in 2020. And it came about partly as a result of his successes over here on the UK and European soul scenes, and also partly because his girlfriend, Karen, lives in Hornchurch, Essex.
“Hah! Yeah, I had to make a fast exit,” he recounts of the situation. “We had been to Gibraltar and then on to Spain, and then right when we got back here in March, that’s when everything shut down. It made it hell for me to get home. I had to fly from Heathrow to Canada, from there to New York, from New York to Utah, and from Utah to San Francisco. Oh, and I had a sleepover in Boston on the way. So the pandemic hit me like nobody else!”