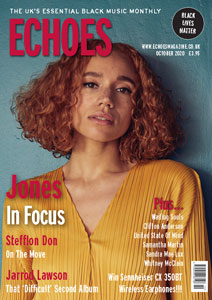 A sneaky peek of just some of what is in the October 2020 issue – OUT NOW!

Just prior to March lockdown, Jones squeezed in one last trip to California. Not a last-minute holiday, you understand: she went to film a video to recent single Giving It Up, the storyboard for which put her on a beach in the summer sunshine, sporting a gorgeous, sheer, cream gown that would make even a goddess look underdressed. The idea: that as she delivered her message about having the confidence in a relationship to express herself sexually, Jones would appear elegant, poised and alluring… by the sea. Unfortunately nobody had ordered the right weather. So when the sun failed to shine and the Pacific Ocean refused to reach its usual bathwater temperature, the poor woman was left shivering right there on the sands. Look closely and you can see her flinch as the water laps about her hips. With typical self-deprecation, she’s laughing at the memory of it all as we kick off our conversation.
“Hah! Yes, the idea was to have a ‘summer video’. It rained the whole time! I tried to smile through it. Really, I did. The whole wardrobe we had taken over wasn’t designed for a cold snap. Afterwards we had to be very selective on the edits because there were quite a lot where I looked grumpy…”

Ahead of our chat, Stefflon Don’s record label informs Echoes that we’re not allowed to record any video. In a year when we’ve seen artists looking boringly normal at home more than anyone probably needs to, you might think that’s probably no bad thing. But for an artist as striking and noticeable as Steff, it’s a bit of a shame: Steff would stand out in most crowds – no doubt a factor in why you won’t be seeing her on the tube anymore. And it’s not just because of the pandemic.
“Never, never. Especially not during corona times,” she soon confirms.
Come to think of it, when was the last time she got on the underground?
“Oh my god: I can’t remember,” she laughs. “Honestly, I don’t know. I wouldn’t mind being on the tube once a while. I don’t do it, but I wouldn’t mind.”
If that sounds like she’s reached that level of fame where public transport is something from the distant past, it’s also down to her having moved outside of London.
“Yeah, I’m in Essex, mate… ”

A six-year gap between albums would normally be seen as the death knell for an artist’s career. In an age when a constant supply of new music – be it on EPs, mixtapes, guest spots or single tracks – is the fuel that drives streaming’s engine, to leave more than half-a-decade between a debut album and the next cannot now be ‘Plan A’ for any new artist. All momentum would surely evaporate, the focus of fan attention long since diverted elsewhere. And yet…
For whatever reason, some musicians just get away with it. Instead of forgetting D’Angelo after he failed to follow-up Brown Sugar for five years, we were salivating for Voodoo. [Hell, we even counted off 14 years until Black Messiah.] Long before that, we sat patiently waiting for Anita Baker to get out of her Beverly Glen deal and sign to Elektra [three years after debut]. We always gave Stevie a pass.

And so it seems it is with Jarrod Lawson…

“This album is different from what everyone else is doing right now,” begins Winston “Pipe” Matthews, lead singer of The Wailing Souls. He’s talking about the group’s new Back A Yard set, which is not only seriously good but also marks their return to Greensleeves, the UK label that released several of their best-known albums throughout the eighties, including Firehouse Rockand Inchpinchers.
“We hadn’t recorded an album for a couple of years, but people need some goodness in their lives man, and we make the kind of songs that’ll soothe your soul and calm your heart. We just needed to find someone who could help us reach them.
“I listen to all kinds of music and what I come to realise is that we don’t need to make our albums sound like anyone else’s. No, this is The Wailing Souls and people don’t want any little flip-flop thing from us; they just want to hear good music and that’s exactly what we’re doing.”